I heard about this petition at a New Internationalist lecture last week.

It is a letter to Ed Miliband, Alistair Darling and RBS chief executive Stephen Hester calling on them to stop the 'irresponsibile lending by profit-hungry banks'. 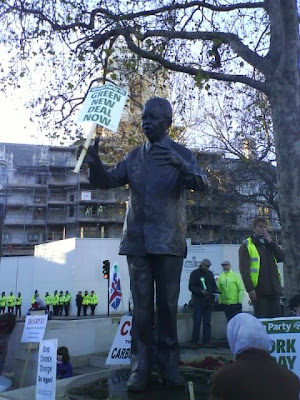 All in all, it was an affable, if rather un-revolutionary day. Despite its role as a reassuring symbol to the wider environmental movement, it did leave me wondering what impact it had really had, and whether I wished I'd gone to Stansted instead. Oh well, bring on January's Climate Rush.
Posted by speckl at 10:16 1 comment:

There have been calls for green 'New Deal's from both sides of the Atlantic over the last few months. Over here most references have been made to one in particular, written by a Travelling Wilburys-style grouping of alternative thinkers and presented by the think tank, new economics foundation (nef).

I won't attempt to explain what the Deal is, as, unsurprisingly, they can do a better job of that themselves. What I will do is copy and paste a very short summary and encourage you to read it yourself. (I assure you that this is to ensure clarity and accuracy and certainly not down to laziness.)

The Green New Deal is a response to the credit crunch and wider energy and food crises, and to the lack of comprehensive, joined-up action from politicians. It calls for:

Knowing very little about economics or joined-up thinking in practical terms and relying largely on an idealistic 'this sounds nice' attitude, I'd be keen to hear what you think. So, add comments as you please.

Becky
Posted by speckl at 09:56 No comments: It's fair to say we're all involved in the climate change debate nowadays, but I wonder if we're becoming a little lukewarm.

Everywhere you look there's a company boasting their green credentials; we're all trying to recycle more, be more energy efficient, hey, even the green party are taking things seriously and getting a leader.

In fact, every time I mention ChiC to someone, they're always saying "Matt, that's so awesome!!! The environment is so cool/hot right now!!!"

But are we in danger of becoming too comfortable with being environmentally friendly, especially with the current economic belt tightening?

Fear not, my friends, for I have coined a term to get us all fired up again. Ladies and gentlemen, I present to you: The Carbon Bumprint.

See, I've been thinking for some time that it's distant relative - the carbon footprint - is becoming something of a rather British throwaway comment, like, "Ooh dear, better turn that TV off standby, we should be reducing our carbon footprint"

Like Tesco, I think every little helps, but I can't ignore the fact that a footprint sounds, well, a bit nice. And shouldn't it be feetprint anyway? I mean how many people do you see being environmentally unfriendly whilst stood on one foot???

Just think about it, the things we do that produce the most CO2 are usually done while sat on our behinds: flying round the globe, driving our cars and generally leaving everything switched on. In fact, sometimes it's the things we don't do that cause us to produce more carbon dioxide and guess what, we're usually sat on our bums not doing them.

The Carbon Bumprint conveys something of the laziness in our society that has led to a nation contributing dangerously to climate change with an over-reliance on oil and not really thinking about the consequences of our actions.

This autmn/winter, if you're feeling a little cold in your home, try getting off your butt and doing five minutes of star jumps - I guarantee you won't need to turn the heating up.
Posted by Matt at 03:40 No comments:

The hypocrisy of advertising

On the escalators going down into the London Underground, there have always been, as long as I can remember, lots of adverts posted onto the walls. Recently however, these paper ads have been removed and replaced with LCD screens, which now flash logos and corporate images at you, as you descend into the belly of the capital.

The very first thing that stuck me when I saw these new illuminated screens was that it was a complete waste of energy. British Gas, who also supply customers with electricity, advertise through this means. Hypocritically, they inform you that if you switch to their service, you will be the beneficiary of a number of energy saving light bulbs. Every time I see the this advert, I scowl and think how much more power British Gas is using to propagate itself, than will actually be saved by customers switching their bulbs.

This got me thinking. All too often, companies are using the green agenda to promote themselves as clearly some genius guy in marketing as latched on to the fact that environmentalism is growing – that change is indeed coming. We should all be wary of this tactic. Don’t be fooled by it.

The truth of the matter is that environmentalism requires people to be sustainable in their way of life - or at least not to be wasteful. Holding back on buying that nice piece of lamb as its been shipped from New Zealand, or taking the train to Paris, as opposed to the plane, are just a couple of simple examples. Marketing on the other hand is designed for one thing, and one thing only – to make us buy tings we don’t really want. This gizmo will get you there that much quicker, make you that much more sexier…at the end of the day, they just want you to spend. The corporate world has no qualms about using environmentalism as a means to an end. Sustainability and consumerism, are quite honestly essentially mutually exclusive.

A way of keeping ahead of this game is to keep informed and to keep questioning everything. Don’t take corporate messages on face value. Always question a company’s motives for saying what they’re saying. Research them, if you have to. Just don’t be fooled.

In the interest of fairness, here is British Gas' energy efficiency website:
http://www.britishgas.co.uk/energy-efficiency.html
Posted by Tom at 02:52 4 comments:

Welcome to the new Change is Coming blog. Sign up to receive sporadic updates on what ChiC is up to, as well as tangential ponderings and therapeutic ravings from those involved in the ChiC campaign.

Please add any comments, requests or plain indignations that strike you while reading our musings. Despite appearances, we do sometimes get sick of our own voices and would very much like to know what you think. (It’s a matter of ego, if nothing else.)

So, sit back, relax and enjoy with us the Change is Coming blog at http://climatechic.blogspot.com.